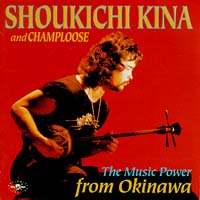 
I first heard a fuzzy, 10th generation cassette of a live recording by Okinawa's Shoukichi Kina and Champloose back in 1980, from a radio listener who had lived in Japan in the late seventies. It was raw, edgy and wonderful. A few years later Henry Kaiser and friends recorded Kina's "Haisai Ojisan", and the legend took root in America.

What made this tape so interesting was it was the first and only time I had heard anything resembling folk rock from Asia. Here was a band of young musicians electrifying sanshin and adding bass, guitars and drums in the only Okinawa garage rock band to be heard outside the islands. You can hear the music clearly on a 1991 British CD reissue. The Music Power From Okinawa (GlobeStyle/UK) is unbelievably viable stuff even fifteen years later. It has all the vitality of punk transposed into an Asiatic mode. It is distinctly "local." There is little given away to make it sound American. The music is, in fact, a reaction to the American occupation of Okinawa during the Vietnam war, and stakes a claim for the locals on an island that has spent most of its history overrun by foreigners. There are lots of interesting ethno-musicological patterns in the region to explain the music. (Read the liner notes. I'll spare you.) The reality is, this was a young bunch of singers and players who were fed up with the status quo, and rocked out in protest.

The songs on this set are wonderfully raw, live recordings made in Kina's own nightclub in 1977, soon after the American retreat from the island. It includes the now legendary "Haisai Ojisan." On this and many of the other songs there is a frantic pacing, singers chanting like a crowd at a football game, the electric sanshin plucked in wild abandon to the thump of bass and drum kit. There are a number of folky ballads that while sweet still have a rough edge that keeps them from getting sappy. The CD also includes two studio recordings that weren't on the original tape, both powerful, madcap and only somewhat slicker rock songs. In 1977, Steeleye Span were electrifying Childe ballads, Americans were playing country with electric fiddles, and Kina was making katcharsee rock. Haisai!

Bloodline (Polydor Japan) is by far one of his best . The opener, "Jing Jing" is wild. Those cheerleader chants are plugged into a more expansive band with keyboards, woodwinds and flutes, electric guitar, and some slide work from Ry Cooder. Cooder also adds some mandolin and slide to a few other cuts, and the ballad "Flowers for Your Heart" features his trademarked electro-acoustic fingerpicking. The whole tone of the record is more magical and energetic,less influenced by the bigger sense of pop music production that pervades the other recording. Paradise (EMI/Japan) makes up for this with some gorgeous moments, especially the environmental ode, "Gaia." Here he also gets a little more international, adding more familiar rock elements, some reggae, even a little Celtic flavor. The liner notes attest to his political and environmental concerns, all of which will be lost to the uninformed listener. But the music is strong, the band talented and casual, and the variety and unusual nature of the material makes for some great listening.

This live 1982 recording is Kina's least "roots" oriented, and most peculiar, with a heavy emphasis on electronics (Yano) ambience and rock. No sanshiens, but plenty of local musical references, the Champloose singers, dark passages and witty musical interludes, and a nice version of "Hai Sai Ojisan" performed by Kina on acoustic guitar with just some gentle electronics from Yano, a sweet and gentle contrast to the more familiar rock versions of the song. A very good recording that was probably Kina's most aggressive attempt to expand the roots of his music without some of the schmaltz-pop abuses of later recordings.

From underground rock (the Globestyle release The Music Power Of Okinanwa) to sophisticated pop fusions, Kina has scaled the heights and plumbed the depths in his quest to make a new music for Okinawa. Earth Spirit (Planet Earth/EMI) was a comeback of sorts, after many years of spotty output. Rumors of his having been captured by eco-spirits or aliens being in the end untrue, he has made a glossy contemporary album that grabs you by the roots and doesn't let go. Mixing African guitar (Yves N'djock from Salif Keita's band) and some hot Caribbean bass with a funky sanshin (a sort of banjo or koto) line makes for some unique music; lively, danceable and so out of place it's wonderful. There is drama in the throbbing title cut (again with the strange staccato counterpoint of the sanshin), voices chanting, percussion punching a hole in the melodic ozone. This is rich earthy stuff. And how about a Celto-Okinawan fiddle tune to complete the circle? Recorded in Paris by Francois Brenant (again from Keita), who also adds keyboards, it has a truly international pedigree. There are a few clunky, pure pop things, but 9 out of 11 makes for a good bet. This is an artist who really deserves global respect and fame, and with folks like David Byrne and Ry Cooder in his corner, I'm betting it'll come sooner or later. Meanwhile, you can be the first on your block (or even in your state!) to spread the word.

I'm not totally in love with In Love (Planet Earth/EMI). It seems to skirt between the more modern, edgy pop of his previous release, Earth Spirit, and schmaltz farm. All the elements are still here in strength, reggae, African pop, American rock and Asian roots, but there is also a tendency towards slickness that just annoys the hell out of me. Too bad, because scattered through this release are some exceptional songs, including what seems to be an Oki-calypso number, some fine Celtic fiddle touches from Peter Lynch, soukous guitar licks and even a goofy rap bit that is fun, if not enlightening. Kina and company can make wonderful music, both culturally weighted and easygoing. His commitment to making a new music for Okinawa is rare and admirable. The overwhelming (underwhelming?) impression is polish for the sake of the shine. This is where the difference between "world music" and "world markets" collide and collapse. If you are already a Kina fan like me, you'll need it for the good cuts. If not, hang tight until the fall, when Luaka Bop Records will make Kina's first U.S release, a compilation of some of his best.

Champloose Renaissance is a sort of "greatest hits revisted." it features live and studio recordings of Kina hits like the elegant "Hana" and a nice remake of his most famous (see:French, Frith, Kaiser and Thompson) song, "Haisai Ojisan." There's "Tokyo Hymn," a groovin' New Orleans vamp, complete with a boogie woogie piano and screechin' sax that'll make you smile. Again the international flair is everywhere, from Afro-Caribbean drums to folky fiddles, but it's always cast in a big electric sound that cuts through everything from ballad to monster synth-rock. It's all irresistable. Kina's political commitment to the furtherance of Okiniawan culture shines through his work, no matter how indecipherable the language may be to you.

This compilation covers pretty much Kina's entire career up to 1995, from the garage rock of 1977's "Hai Sai Ojisan" through the lush pop of later recordings. The bulk of the record is from Bloodlines (with Ry Cooder sitting in) and The Celebrations (his collaboration with electronic artist Makoto Yano. It's readily available in the US and Europe, and is a good first listening, although I would recommend seeking out Music Power of Okinawa a first choice if you have access to British imports.