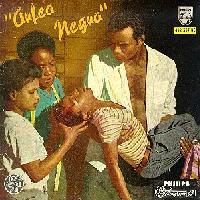 Black Orpheus
The film and bossa nova
By Wayne Whitwam

Before the world heard Astrud Gilberto's whispy voice, before they knew of Stan Getz' velvety sax, they saw Black Orpheus. The film (in Portuguese, Orfeu Negro) put a face on a new style of samba that was fresh, romantic and very accessible to jazz hipsters. It was later called bossa nova (or "new wave" or "new groove"). Only a year before (November 1957), Antonio Carlos Jobim (and Newton Mendonca) had released the album Desafinado, featuring this new style of samba, incorporating it with jazz stylings, poetic lyrics sung by João Gilberto, and a 4 on 3 stammering rhythm. Jobim and Luis Bonfa wrote the soundtrack to the motion picture. This 1959 Cannes Film Festival Grand Prize winner (and Oscar's Best Foreign Film, and a Golden Globe winner) was based on the Orpheus-Eurydice legend but updated and played against the colorful background of Carnival in Brazil, featuring an all-Black cast. French director Marcel Camus created the movie from Vinícius de Moraes musical play Orfeu da Conceição."

More than just showcasing samba, Black Orpheus brought this music to life, making Antonio Carlos Jobim and Luis Bonfa international stars. From the very opening title scene, where favalistas burst through an ancient frieze of Orpheus and Eurydice, to the climactic Carnival parade, music pervades practically every moment of the film. Even the streetcars seem to dance.

As in the Greek legend, Orpheus is a legendary minstrel among his neighbors in the slums above Rio. He also works as a streetcar driver, where he first meets a naive county girl, named Eurydice. She has run to the city to escape from a jealous suitor that means to kill her. Orpheus protects her, and they fall in love. Death finally catches her but unlike the snake in the Greek myth, in the film she's bitten by the electrical sting of a hot cable-car wire. Inconsolable over his loss, Orpheus searches for her in the land of the dead. The underworld in Rio is the Bureau of Missing Persons and a Macumba ceremony, where Orpheus attempts to contact her spirit. With the help of Hermes, Orpheus is finally guided to the city morgue where he finds his deceased love. Despite it's tragic ending, the film ends on a happy note with the children singing "Samba de Orfeu." The legend of Orpheus and Eurydice lives on.

The music is timeless. The soundtrack sold millions. United States jazz musicians like Stan Getz and Charlie Byrd began to cover Orpheus numbers like "A Felicidade" and "Manha de Carnaval" (Morning of Carnival) with as much enthusiasm as other popular Jobim songs like "Corvacado" and "One Note Samba." As bossa nova began to grow in the U.S., Getz along with João Gilberto and his wife, Astrud, released "The Girl from Ipanema" in early 1963. This created a big hit in the U.S. and Europe, and virtually sent the whole bossa nova movement into orbit. Throughout the mid-Sixties all-things-Brazilian became an integral part of world culture. Bossa nova would have become fashionable without Black Orpheus. However the film brings the music alive. - Wayne Whitwam

Other Resources on RootsWorld:
An over view of popular music styles in Brazil
Reviews of some recordings by Brazilian artists
A talk with Carlinhos Brown
More about Milton Nascimento