It is impossible to go anywhere today in Brazil without hearing the music of Carlinhos Brown. His name is almost synonymous with music. Carlinhos Brown says he is a workaholic, if you can call singing, drumming, writing and dancing "work". In addition to his band Timbalada, and his solo record, Alfagamabetizado, he has been collaborating with artists from all over Brazil: Daniela Mercury, Marisa Monte, Sergio Mendes, and even the rock group Sepultura. 30 of Brown's compositions have topped the Brazilian charts over the past decade. If you flip on the television, you'll see him dancing, and of course, drumming around Toyotas. The one constant: the Bahian sound, a mix of Afro-Brazilian percussion with a touch of a reggae beat. Carlinhos Brown is one of the leaders of a movement that takes the traditional Afro-Brazilian drumming, and sets it to pop beat, with electric guitars and a brass section. The sound is infectious, and it is largely responsible for Salvador's millions of visitors annualy, tourists on musical pilgrimages.

There are certain cities that simply "are" music, cities that live and breath creativity, New Orleans, Louisiana or Havana, Cuba. Salvador de Bahia is certainly one of those cities.

Salvador de Bahia was Brazil's first center of government (from 1549 to 1763), but remains it's musical capital. For centuries, Bahia was home of the Portuguese the sugar industry, and the slave trade. As a result, today Salvador is the largest center of African culture in the Americas. Amidst the colonial architecture and cobblestone streets, there is the unmistakeable beat of Bahian drumming. You can hear it in the stereo speakers and boomboxes blasting the latest Axe pop music. It becomes overwhelming when the large drumming ensembles take to the streets. Olodum, Filhos de Gandhi, Ile Aiye, and Carlinhos Brown's Timbalada all perform regularly in public. These groups "Blocos Afros" don't just have two or three drummers, but often number in the hundreds.

Carlinhos Brown began drumming as a child. No, there weren't any drum kits. As many children in Bahia do, Carlinhos began selling bottles of water on the streets. His first drums were the empty water bottles he carried back at the end of each day. As a teenager. after falling in love with the music of James Brown, he changed his name from Antonio Carlos Santos Freita to Carlinhos Brown. He began playing music from all over the world, Angola, Cuba, America, and Brazil, taking tunes of Elvis Presley, James Brown, and Roberto Carlos, and transforming the music with an Afro-Bahian sound. In the early 1980s, he was hired by Salvador's radio station WR to compose advertising jingles, pop tunes, with that Afro-Brazilian drum beat. They becamse instant hits. This led to collaborations with Caetano Veloso, Gilberto Gil, Gal Costa, Djavan, and others, and gave Brown the opportunity to launch the band Timbalada. The group is named after the timbal, a small hand held drum which he designed.

Today, Timbalada is one of Bahia's most popular bands. Timbalada features 120 instrumentalists (most of them drummers). Based in the neighborhood of Candeal, Timbalada is also a neighborhood association. Brazil has no social safety net, and the country has the largest gap between rich and poor in the hemisphere, with millions lacking housing, education, and access to health care. Timbalada's social mission includes educational projects, and aid to street children. "Like many cities in Brazil", says Brown, "we have many many street children. One of our projects is working with these kids, allowing them to work with professional musicians, and play with a wide variety of instruments." 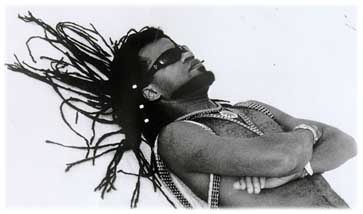 I met Carlinhos Brown for this interview in an empty office. He entered, singing, walking with a dance in his step. He had just finished a new Timbalada recording, and couldn't get the music out if his head. There were no instruments there, so I thought. I asked his about the wide variety of percussion instruments he plays on stage. At that point, he took his plastic cup, and began playing it, transforming it into both a scraper and a drum simultaneously. He then began playing the table. Brown explained, "Everyone has some 'craziness', which is the source of creativity. Everything around is 'alive'". At that point, he put down the cup, but the music continued. Every few minutes or so, he would break into song. This unfortunately isn't part of typical American conversational skills, but for Carlinhos Brown, it seems as natural as breathing.

Alfagamabetizado is full of this creative craziness. On the song, "Bog La Bag", he uses his voice as a percussion instrument. The song begins with the trademark Bahian beat: countless drums with a touch of reggae. Then the vocal percussion kicks in. "Bog la bag la bog la bag la bog la bag la bog la bag la bo bla bla". This exchange repeats every two seconds, and sets the base rhythm of the song. Like playing the cup, this was completely natural for Brown. He also uses vocal drumming on the song "Cobricada" on Timbalada's CD, Mineral. "Creativity comes through experimenation. I want Timbalada to be different. I am trying to talk about the planet, about the origins man, the origins of eduation, and about the beginning of communication of letters and words. Sometimes, people forget that sound came before words."

This Afro-Bahian sound is part of the "Negritude" movement, a Black pride, a reclamation of roots. Carlinhos Brown credits the group Ile Aiye, "They have maintained this tradition of what it means to be Black in Bahia, to bee poor in Brazil, singing about slavery, colonization, and pain." However, Brown has a different message. "I want people to be able to learn from this, from the hundreds, thousands of years of our history, our ethnic background, and to find a better way. I want people to rediscover happiness."

Salvador de Bahia is a place where people find happiness through music virtually everywhere. On just about any evening, Bahia's top bands can be found drumming in the streets, or performing in clubs. Like Rio, the city of Salvador is famous for its carnaval. For both cities, it is an enourmous festival leading up to Lent. That is where the similarities end. Rio is famous for its Samba schools, elaborate costumes (or at times no costumes), and a huge parade held at the Sambodromo Stadium. Salvador is Brazil's street carnaval. It lasts for weeks. The music begins daily as early as noon and runs until 7 or 8 the next morning.

Brown explains, "We play, not for money, but to celebrate happiness. Our carnaval is a street carnaval. It is for everyone, not just for those with money." The bands play on huge trucks, packed with loudspeakers. At this year's carnaval, as Timbalada marched through town, tens of thousands gathered, jamming the streers for as far as the eye could see. Brown jokes about the experience in the song "Formigeiro" (from Timbalada's latest CD, Mineral), "At Carnaval, our population instantly doubles. There are so many people, that from atop the trucks, they begin to look like insects".

Each year, there are certain songs that sweep the city, ones that end up as covers for dozens of bands. And more often than not, the "big song in Bahia" is a Carlinhos Brown composition. Last year's big hit at carnaval was Brown's "Rapunzel" (Yes, it is about the famous fairy tale concerning the young woman with very long hair). The song made Daniela Mercury's album "Feijao com Arroz" a huge hit. The big hit for carnaval 1998 was yet another Brown composition, Timbalada's "A Latinha".The song, about a desires for a young Latina woman, tranformed the streets of Salvador this past February, as the millions of carnaval-goers swayed from side to side-arms in the air, singing along in what became a carnaval anthem.

"A Latinha" was just one of many highlights from Timbalada's 1998 Trio Electrico. These are the big tractor-trailer trucks packed with huge speakers. Decades ago, the bands on small pickup trucks were normally trios. Even though there arer regularly 20-40 bandmembers atop 18 wheelers today, the name still sticks. The big carnaval headline came when Carlinhos Brown did the "Full Monty" aboard the Timbalada Trio Electrico. What is considered "normal" for women in Rio was big news in Bahia. Brazil, like most parts of the world, treats male nudity quite differently than female nudity.

Despite Carlinhos Brown's love for "craziness", he still prefers to make headlines by making music. His newest CD is Timbalada's Mae De Samba (Mother of Samba), a record that looks at some of the links between Afro-Bahian and Cariocan (Rio de Janeiro) percussion. The latest star to collaborate with Brown is Rio's legendary sambista Alcione. The result is magnificent. Bahian and Cariacan vocals and drums are integrated flawlessly as Brown bridges the rhythms of Brazil's fabled musical cities.

In just two decades, the kid that grew up playing music on empty water bottles has transformed the music of a nation, creating new instruments, new sounds, and playing a large part in introducing the world to the music and culture of Salvador de Bahia. Brown explains, "I believe that my music will cross borders, because it is a music open to the world, open to everyone." - Dan Rosenberg

Portions of this article first appeared in the November 1997 issue of Rhythm Music Magazine.